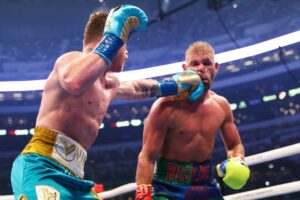 The world boxing star Saúl “Canelo” Álvarez did not disappoint on his promises and dispatched the Briton Billy Joe Saunders in eight rounds in the presence of 73,126 fans at the AT&T Stadium in Arlington, Texas.

For all the bravery and psychology shown by Saunders prior to the fight, a more close showdown was expected, but Canelo did not allow that and from the first round he came out attacking Saunders’ liver and face. The Briton tried to use his jab to keep the Mexican away without much success.

At the end of the fight, all the judges had the Mexican up, indicating that Saunders had only two options, going out and attacking or dying in the line, and indeed the last one happened, since he succumbed to the strong blows of the Mexican, especially an uppercut to the right cheekbone, which could have led to a possible fracture and was the reason for the end.

After the victory and with his sights set on being the undisputed champion, the Mexican challenged American Caleb “Sweet Hands” Plant, who holds the IBF 168-pound crown.

For up to the minute boxing news, click the following link > Latest Boxing News<