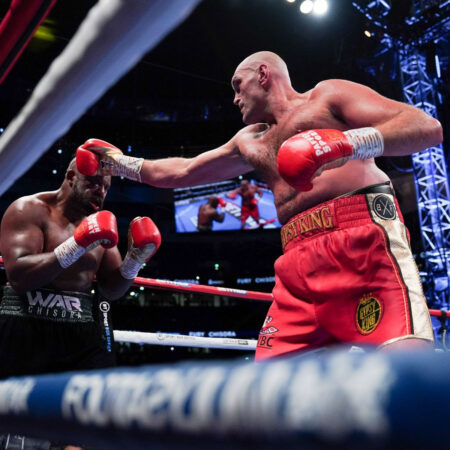 Tyson Fury, Oleksandr Usyk and Joe Joyce gave us a glimpse of the heavyweight landscape for 2023 in the aftermath of Fury’s 10th round destruction of Derek Chisora at the Tottenham Hotspur Stadium..

The Gypsy King retained his WBC world heavyweight title and Lineal champion status with a dominating display against a stubborn and incredibly brave Chisora.

During the traditional ring melee following the fight, Fury went nose to nose with Usyk on the ring apron and the pair were later joined by Joyce. Fury insisted that if Usyk does not unify early next year then Joyce would get his shot. Hopefully we get to see both fights by the end of next summer.

“What a crowd!” yelled Fury in his post-fight interview. “60,000 people at Tottenham, you are amazing and I am flabbergasted for words to say how much it means to me. It is overwhelming for me and I want to say a massive thank you to everybody.

“I felt good and I needed some rounds. I haven’t boxed since April and I’ve had a retirement and I’ve had a lot go on. I felt like I was landing my jab and landing some good punches. Take nothing away from Dellboy War Chisora, he is an absolute warrior and it has been a privilege to fight him three times. He is a British folk hero.

“We’ve had three epic fights and what a tough man. I was hitting him with shots that would knock anybody else spark out and he stood up to every one of them. And he was calling me a little bitch in there!”

Chisora launched himself into the fight in typically bullish fashion before Fury found his rhythm, got his jab going and landed a couple of telling hooks. Fury was really in his stride come the second round and, after a spot of grabbing and holding, he ultimately began to use Chisora for target practice.

The Fury uppercuts were finding their spot and, as he does in times of trouble, Chisora took to the ropes and invited more punishment.

Both took a tumble in the third, but it was effectively one-way traffic and Chisora was shipping some serious shots and again showing his unquestionable bravery.

Chisora’s legs twice looked unstable in the fifth as Fury continued to crank up the pressure. How the Finchley man withstood the onslaught, only he will know.

Chisora looked out on his feet at the end of the ninth and referee Victor Loughlin appeared to be urging his corner to call time. However, he still came out swinging in the 10th, but with about 10 seconds left the Scottish ref made a merciful intervention.

Daniel Dubois is still the WBA heavyweight champion of the world, but such a status looked heavily in doubt in the first round of his first defence against Kevin Lerena.

Dubois appeared on the brink of a shock defeat when, after being caught by the South African on the top of his head, his knee appeared to give way and he subsequently took three counts over the course of the round.

Following the instructions of Shane McGuigan, Dubois composed himself and cautiously eased his way through the next round before completing a remarkable turnaround in the third. Lerena was flattened by a clubbing right before, seconds from the bell, Dubois unleashed a barrage of shots, including a brutal left hook and right uppercut, and referee Howard Foster had seen enough, even though the bell sounded.

Denys Berinchyk is the new European lightweight champion following his defeat of Yvan Mendy over 12 rounds. The undefeated Ukrainian always appeared to be doing enough to edge most of the rounds despite being out of the ring for a year due to the invasion of his homeland.

Victor Loughlin scored the fight 117-112, with both Kieran McCann and Kevin Parker returning cards of 116-112. Berinchyk was accompanied to the ring by heavyweight champion Oleksandr Usyk.

The 22-year-old light heavyweight Karol Itauma made it seven stoppages from his nine wins as a pro with a late halting of the game Slovakian Vladimir Belujsky.

Chatham man Itauma, half Slovakian himself, outclassed the now Cork-based Belujsky and systematically broke him down with a particularly spiteful jab. Belujsky began to seriously wilt in the seventh round when a short right from Itauma started a sequence of punches that put the 27-year-old to the canvas.

He managed to see out the round, but further punishment inflicted by Itauma in the final round convinced referee Lee Every to call it off with 1.18 on the clock.

In a spectacular start to the evening, teenage prodigy Royston Barney-Smith applied another stunning finish to end the resistance of Cruz Perez in just over a minute. A sweet left hand counter put Perez to his knees and, despite protests, referee Mark Bates took a good look and waved the fight off with 1.02 of round one on the clock. The 18-year-old Barney-Smith moves to 4-0.

The early birds of the card, Isaac Lowe and Hosea Burton, both recorded victories over six rounds against Sandeep Singh Bhatti and Reinis Porozovs respectively.